I had a hard time pronouncing this name, Thanadhar. When I was trekking to Thanadhar from Kotgarh, I saw a signboard with Thanadhar written in Hindi and that’s how I got to know the exact pronunciation. The trek from Thanadhar to Kotgarh was just easy, nothing sort of a hilly hike. The only thing was that I had forgotten to carry a water bottle and I didn’t find any shop on the way to Thanadhar from Kotgarh. But when I reached the village, I visited a small café to have something to eat and bought a water bottle. When I reached Thanadhar, it was already getting darker. The sun was touching the horizon, spreading its silhouette and the birds in the sky were returning to their homes. I saw at a place and stared at the sun getting hidden behind the hills. The sky looked like a canvas, painted with several shades of red, blue, and orange. I was just aimlessly roaming in Thanadhar.

There are a lot of things to do in Thanadhar but I hadn’t had any idea. Moreover, it was already dark and I had no other choice but to go back to the hotel I was staying at since I had no personal vehicle and it was really hard to get any cab at night. I was just roaming in Thanadhar and watching the sky. The night was so beautiful; it looked like a newly wedded bride with all the jewelry and other things all around. Yes, that’s how the stars hung in the sky looked like. I had spent some amazing nights, camping at Triund and camping at Sam, Jaisalmer.

Had I reached Thanadhar on time, I would have done a lot. At least I would have visited the apple plantations or the plum gardens which I had missed. While I was browsing through my information online, I found some really nice activities to do in Thanadhar which I could have only done if I had enough time. I wish I could have come here in the day. Since it was the first day of my weekend trip and it was only for two days, I had to somehow manage it. Moreover, my primary desire was to take a trek from Kotgarh to Thanadhar which I had done. I love trekking and whenever I am in places like this, I feel like just embracing the open road and walk as long as I can. That’s what I did here, roaming around the streets of Thanadhar.

I reached Thanadhar at around 6 PM. While I was roaming in Thanadhar, I came across a small ground and I asked some kids what that place. They told me that I was the primary school. I sat there on the stairs and took a rest for a while. I had minor backache and my lips were dry since I had no water all the way from Kotgarh from Thanadhar. So, here is a tip for you. Always carry water and drink sip by sip whenever you feel. When I trekked Triund, I had a water bottle with me, and also there were small stalls/shops on the way from where I refilled my water bottle so it wasn’t that challenging.

So, I placed my tripod and put my phone on the hyper-lapse mode to record the sunset which looked brilliant, like the sun was melting over the hills at some distance. I finished recording in some half an hour and started walking again. A small boy started following me. He told me that he had been following me the moment I entered the village. He asked things about me and I asked him things about him and the village. I followed the road and kept walking on it. Small houses and people busy with their regular work. I asked a man if I could find a place to eat and he told me there was a small café but he wasn’t sure if it was open or not. I continued roaming in Thanadhar aimlessly with nothing much to know what I was supposed to do there.

Finally, I spotted a small café and I entered. It was empty, so empty that no one was there. I looked around and finally, a guy showed up. I asked him if I could get anything to eat. The only thing he could offer me was veg noodles though I had no mind of eating noodles but I had to since there was no other option. So I ordered a plate full of veg noodles and a cold drink and curb down the appetite from bothering me more. I got a water bottle and within ten minutes I left from there. It was already 8 PM and everything was getting dark and dark. I wasn’t sure of the ways to get back to the hotel. And trekking back to Kotgarh was something I didn’t give a thought and I wasn’t in no mood to do that.

I walked towards the main area; there was a small bus stop. I walked past and reached a departmental store to buy some snacks and asked the shop owner if I could get a cab to go back to Kotgarh and he called someone and arranged me a cab. He seemed a nice guy else I had to find some way to stay in Thanadhar village only. 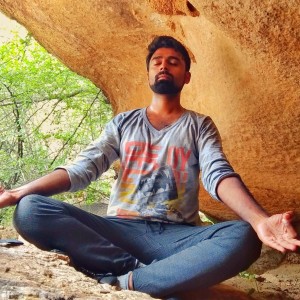